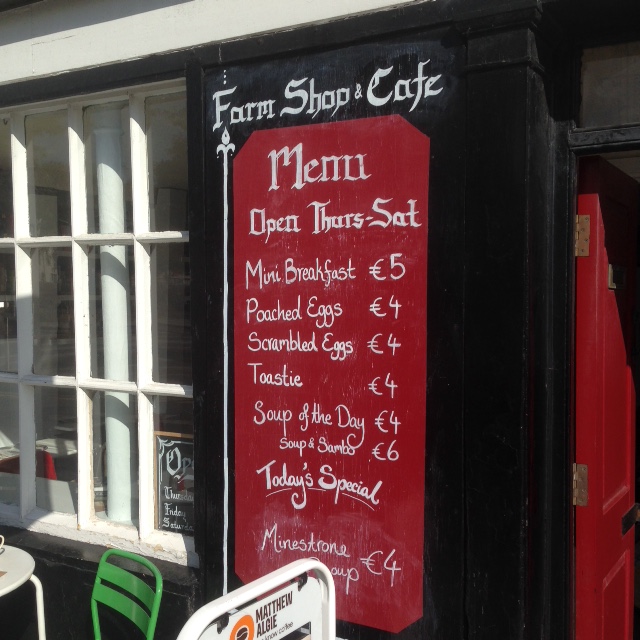 In an age where supermarkets and large chains dominate and dictate food production and distribution, it is easy to appreciate how people have never felt further from their food source. The cashier in the supermarket who sells you oranges from Spain or fruit from Egypt cannot tell you how the products were grown, where exactly they were grown or who grew them. Understanding of where food comes from and how it is produced is pretty low and it has a lot to do with how we buy it.

Although there are alternatives to big supermarkets, a once a week farmers market which could take place between twelve o’clock and four o’clock on a Thursday is fairly out of reach for working people. It’s fairly awkward to get food which is still close to it’s producer, I think it’s fair to say.

Colin Wolfe, from Douglas in Co.Cork, is helping to buck this trend with his shop and café based in the heart of Cork City called ‘Siopa gan Ainm.’ Colin , whose family originally hail from Skibbereen, has a farm located between Coachford and Macroom. If the shop is the face of his business well the farm is certainly the heartbeat. 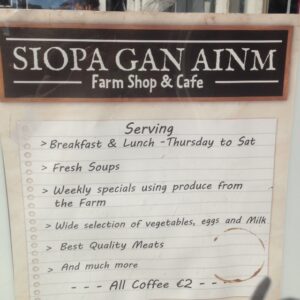 The ethos that the shop is built on is the idea of ‘local.’ The majority of food on sale in Colin’s shop is produced by Colin. If he did not produce it, he knows the producer. For example, the majority of the veg sold in the shop is grown by Colin’s brother in law , Peter Ross. The milk used in the café is his own and from his neighbours’ farm.

The butter sold in the shop is produced by Colin’s sister and her husband, Vallery and Allen Kingston from Drimoleague, who are behind the successful butter/dairy brand Glenilen, which some people may have seen on the shelves in Tesco.

Contrass apple farm in Tipperary make the apple juice for the shop, using apples grown in Colin’s orchard and  the honey comes from a local hobbyist in Bishopstown, only 15 minutes from the shop.

On top of this, all of the eggs, which are used extensively in the Café’s tempting breakfast menu come from Colin’s farm. Also impressively all of the beef,lamb and pork/bacon products sold in the shop and Café has been raised and fattened by Colin. It must surely be unique to find your farmer on hand as you purchase or consume meat in a city shop.

There is nothing present in the shop or café whose origin cannot be explained by Colin who, more often than not, can be found on hand in the Café when it is open from Thursday to Saturday. Opening in the fixed shop on the Coal Quay was the next step following their continued success for over ten years at the Coal Quay and Emmet Place farmers markets.

The frank, open nature in which Colin speaks about the food he sells is refreshing. ‘Local’ is the direction which Colin has decided to go. He feels that terms like artisan and organic are marketing tactics which have been overused by many companies trying to gain leverage in the food production business. Colin revealed that in order to be allowed to use the tag ‘organic,’ producers would have to navigate through layers of bureaucracy which is a costly process. While confident that his vegetables would be considered organic, in Siopa gan Ainm local is the key.

The shop pops up with a fresh start and brand new stock every week. They will remain open for the weekend until they have only enough food left that they will be able to consume themselves before the next Thursday. Working in the shop and Café you will find Woofer volunteers. Woofers work out on Colin’s farm and many other organic farms around the world  in exchange for accommodation, meals and exposure to the English language, which makes the café a hit with the volunteers. One student Woofer, Chiara,  enjoyed working  in the Café so much that she returned from Australia to work for a second spell in the café. 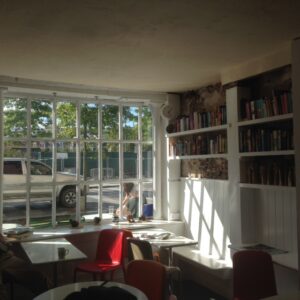 It is easy to recognise the strong link between the shop front and the farm when you spend time in Siopa gan Ainm. There is a simple, charming decor which doesn’t impose itself. The quality of the food here does the talking. In a time when people have never been further from the source of their food, visit Siopa gan Ainm to be  but one step from the farm in Cork City Centre.

Siopa gan Ainm, ach lán le anam! to give it its full name- Shop without a name , but full of soul!